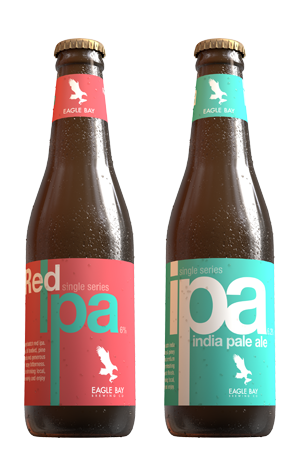 Eagle Bay have brewed a long list of styles in their ten years of operation, including many a forgotten or out of focus style, making a habit of homing in on recipe and execution over trend and hype. One of their latest Single Series releases is a perfect example of this: a malt-driven Red IPA featuring New World hops that's refreshingly void of haziness and acronyms.

Hops and malt are cleverly at play in this richer style of IPA with impressive dark, ruby hues topped with an off-white head. A robust grist includes acidulated malt, Carared and Munich malts that unite to add layers of caramel and soft, roasty characters. Indeed, malt is the driving force here, but hops are the all important passenger; old school resinous, grassy hop characters are upfront with bright, citrusy and floral aromatics persisting through the lengthy finish. A firm bitterness is present though complementary.

The malt heavy Red IPA isn’t the only hoppy offering from Eagle Bay this autumn, however, with a slightly hoppier, "straight up" IPA released in unison under the Single Series banner. This variation of the style feels more like a West Coast meets English IPA, with its medium, golden-hued body, sizeable 60 IBU and an abundance of citrusy, pine needle and ripe stonefruit characters dominating. The 6.2 percent ABV is nothing to scoff at, though it is well placed amid a slight sweetness and the resinous, fresh hop characters imparted by healthy doses of Centennial, Citra and Mosaic.

Neither of these beers were meant to make it into bottle but, in a lucky positive for punters statewide, as a result of the shutdown these super small volume, super fresh IPAs will hit fridges instead of taps in limited quantities.