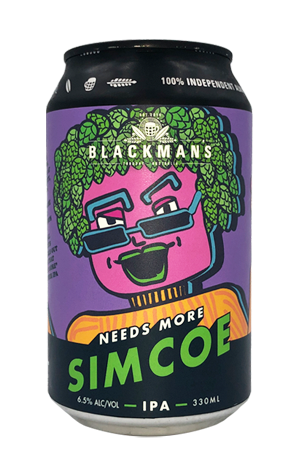 Normally, Blackman's on road legend Luke ensures their Same Day IPA releases arrive at Crafty Towers on the same day they're packaged so we can tell you about them ASAP to aid those seeking the freshest of hop hits. The release of Need More Simcoe was exactly the same, but with one small issue: there was no one home at Crafty Towers. Undeterred (and having made the trek across Melbourne), Luke instead left a four-pack as a gift to be discovered within a wicker basket upon our return. And what a welcome gift the beer is.

It might not explode out of the glass in quite the same manner as Needs More Citra (although I'm not sure any beer can without the brewers inserting an actual explosive in the can), but it's still a welcome and vibrant assault on the senses. Awash with pine, citrus rind, pot pourri and flashes of liquorice and candy, it's easy to see why Simcoe has been one of the big-hitters of the past decade and more. As you expect from Blackman's, it's just part (albeit the key part) of a well structured and finely judged IPA.

And if your local sold out of their allocation before you read this, fear not, as there's a second batch coming before the month is out.