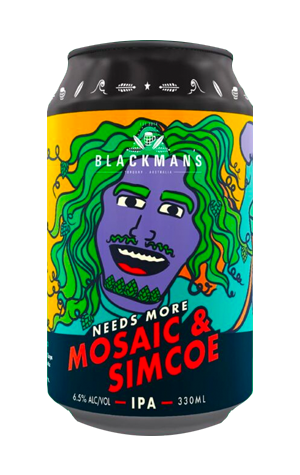 The all-the-hops-you-can-handle Needs More series from Blackman's is already up to number four, and this time comes with a wee tweak. Rather than showcase just the one hop variety, they've taken one of the hops that's dominated the global craft beer world in recent years, Mosaic, and partnered it with a big-hitter that's been around a little longer and starred in the July release: Simcoe.

As for the latest character to adorn the cans, it's someone I last saw wearing a tie-dye dress, knocking out Rage Against The Machine covers onstage at Blackman's graphic designer's wedding: brewer Rick Bennie. The beer behind his beaming visage is as full on as you'd expect of one triple dry-hopped with multiple formats of the aforementioned hops too.

There's pithy grapefruit rind, sherbet lemons, vibrant, lifted (rather than earthy) pine, and a dankness, although the candied berry / blackcurrant I typically associate with Mosaic isn't that prominent. There's no little mouth-lining bitterness, which is of an equally complex nature flavour wise: there's a resinous bite, but also a kaffir lime herbal character and much more pine needle action too, all of which combine to leave you with a lengthy, lingering perfume of the sort a cross-dressing brewer-guitarist might apply before leaping onstage...