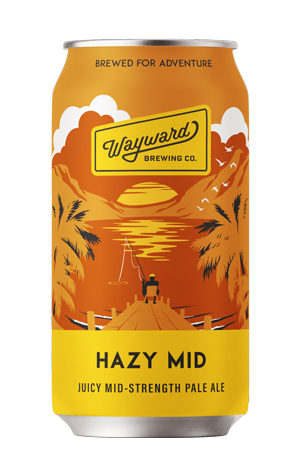 While Wayward already have one mid-strength option in their core range – Raspberry Berliner Weisse – the team have wanted to add a mid-strength pale ale to the lineup for a while (if only so the brewers can have a hoppy session after work and still rock up bright-eyed the next morning). Enter Hazy Mid, just in time for Christmas 2020.

Many current hazy beers focus on newer hop varieties, but Hazy Mid leans on those classic US varieties that held up the West Coast IPA scene a few years ago: Citra, Simcoe and Chinook. The result is a juicy hop personality, with orange juice and some tropical aromas oozing out of the glass, but with no mango or coconut to be found.

As head brewer Shaun Blissett puts it: “There’s this perception that mid-strength beers are basic and don’t taste like much, but this is not your average mid. It’s got big hop character and great pale ale flavour — it just happens to be low in alcohol…

“We haven't compromised on flavour at all.”

You can follow the lead on the label, and take a few cans of Hazy Mid when you go fishing while a glorious sunset lights the water. Or you can follow my lead, and drink them on your living room floor with friends. Either way’s good.

NB: Crafty Cabal members can try to win a case of Hazy Mid in one of our beer club ballots, running til early January...