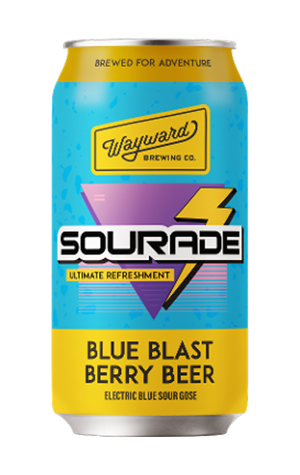 From the moment you crack a can of Sourade, the room smells like sour rainbow straps, that sugar-coated confectionery that looks like a multi-coloured cavity.

But there’s no multi-colour once it’s poured in the glass. It’s one very distinct colour - an insane electric blue. For fans of Fallout, the post-apocalyptic video game franchise, it looks like Nuka Cola Quantum… except bluer (and presumably less irradiated). The brewers stripped away all the natural beer colour and replaced it with blue food colouring, which you can read more about here.

It really does make you think of blue sports drink, with that light, slightly minerally fruity flavour that you assume comes from the fruit listed on the label. It’s clean and refreshing, and since it’s a gose it technically is a source of electrolytes thanks to the added salts that make it a gose.

If this all sounds a bit weird, it’s supposed to be. This is why head brewer Shaun Blissett made this beer originally for GABS, which “has always been a safe space to put out all of the experimental, different and downright dumb ideas you’ve had as a brewer.”