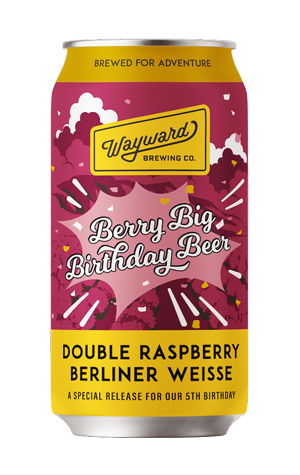 It's five years since Wayward took up residence at their Camperdown home and they've decided to celebrate by brewing a souped-up version of a five-year-old beer.

Founder Pete Philip chose to put a raspberry Berliner Weisse (then called Sourpuss) in the brewery’s lineup from its earliest years – a bold choice at a time when sour beers weren’t "a thing" in the Aussie beer scene. But the proved popular, won a prestigious AIBA trophy, and five years later it’s their best-selling beer.

Berry Big Birthday Beer is Wayward’s Raspberry Berliner Weisse all grown up. The brewers threw double the raspberries into the batch (vibrantly red berries from Coffs Harbour) and doubled the ABV, giving it a deeper pink blush, a denser soft head, and an increased sweetness and body than the original. But, somehow, it’s managed to retain that supremely palatable crispness that makes the old favourite go down so easily, with a clean tartness that’s just right for when the sun sinks low on a warm spring afternoon.

The descriptor of the original still fits perfectly, however: "ridiculously refreshing".