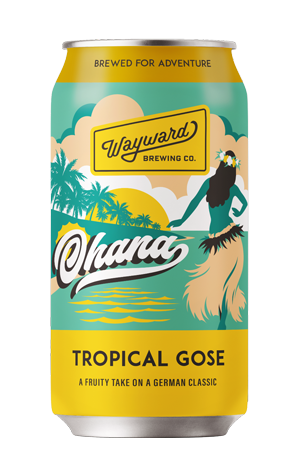 “Ohana means family. Family means nobody gets left behind or forgotten.”

Perhaps the team at Wayward were thinking about this quote from Lilo & Stitch when they named this beer, knowing that it’s more important than ever that people look out for each other in the current climate. Or maybe they just wanted a good, Hawaiian word to capture the tropical island vibes of this beer. Either way, it's a fitting name.

Ohana is by no means the first gose that the Wayward brewing team have made, but it’s the first one they've canned. In this writer’s never-humble-enough opinion, a gose with fruit additions is up there with the most refreshing beers around, and Ohana definitely fits the category. The fruit bursts from the glass like the sun bursting from the water off Oahu, with mango, pineapple and orange riding the wave of tartness. A tinge of salt on the lips at the end is enough to whet your appetite for whatever comes next: hopefully a luau; possibly a viewing of Lilo & Stitch.

Wayward Brewing have been doing their thing as gypsy brewers since 2012, but finally settled in to their own digs in late 2015. Cabal members can now see what Wayward is all about, with a free middy of any Wayward beer, to be redeemed at our brewery cellar bar. Show me more