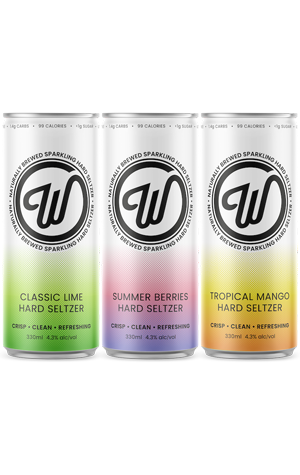 Before this year, I didn’t hear the word "seltzer" unless I was watching an American sitcom. But the arrival of hard seltzers has changed that; like "curb", "cookie", and Taco Bell, this American has come to Australian shores and is likely here to stay.

Wayward have entered the hard seltzer market with a bang, introducing not one but three flavours of this brewed beverage under the sub-brand W Seltzer. The tall 330ml cans make you feel a little bit fancy and summery, like you’re at the annual picnic for a yacht club.

If you were to pour the three flavours into glasses side by side, you wouldn’t be able to tell the difference between them – all three have the same crystal clear sparkle. The difference is in the smell and taste: Classic Lime is all about being light, clean, and crisp – a lime wedge squeezed into soda water. Summer Berries has the sweet, cakey whiff of a blueberry muffin, with a softer, almost fairy floss flavour. Tropical Mango carries a sticky nectar aroma, the biggest taste impact of the series, and is the only one of the three where the flavour hangs around in your mouth after you’ve finished your last sip.

While Wayward have released these in time for summer, they’re available year round.

Note: there may be other hard seltzers released by Wayward, but we won't be writing about them. We're happy to let readers know which breweries are playing in this space, but we're a beer website and need to focus our attention on the diverse array of beers being released.