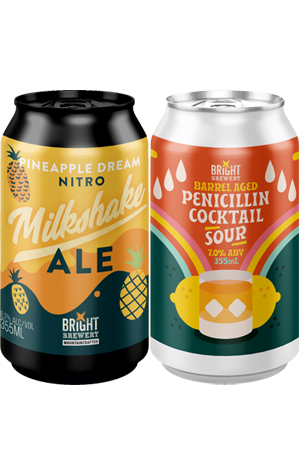 UPDATE (01/03/21): Pineapple Dream cans have been recalled by the brewery. They have found some cans are experiencing secondary fermentation, leading to bulging, potential rupture, and potentially increased ABV. These issues are only affecting cans not kept in cold storage, but they are recalling all cans to be safe. Kegs are unaffected.

At the current rate, it shouldn't take too much longer for Reid Stratton to have touched upon every flavour, aroma, texture and concept possible since taking up the head brewer role at Bright Brewery. Hot on the heels of the Inversion double NEIPA comes another pair to get the traditionalists grumbling into their altbiers.

Pineapple Dream is Bright's latest nitro-injected beer, one so dense and rich it feels like the addition of nitro is something of a piss-take. It's a "milkshake ale" of which 30 percent of the liquid is pineapple juice yet reminds me more of the pineapple Toffos I'd gorge upon as a kid – that or banoffee pie in its vanilla-enhanced toffee dessertness. Hazy deep copper with the nitro action most apparent in its huge head, there’s a tangy, fruity edge that teases the side of the tongue but, for the most part, this a gloopy, sweet, toffee-laden wave smothering its way to your gullet.

Existing in a rather different part of the beer sphere is Penicillin, a cocktail sour aged in Scotch whisky barrels and blended with ginger, lemon and honey. Blindfolded, you'd think you'd been handed a cocktail rather than a beer as it unfurls its herbal, medicinal aroma; if we're talking memories here, it's the time I had to visit a doctor in Phnom Penh – he was a real relic from the colonial era – after I picked up dengue fever visiting villages off the Ho Chi Minh trail in southeastern Laos (and doesn't that feel a hundred lifetimes ago...). Lean on the palate, it's a little like a ginger beer shot through with anise and a drying, peaty smokiness: a GABS beer without the need for a container bar.