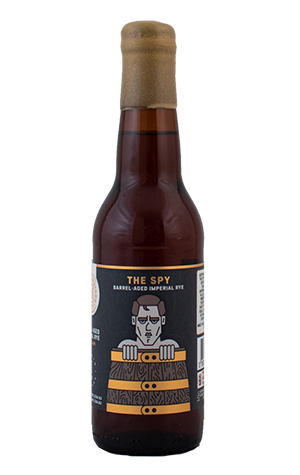 Well before we knew what a novel coronavirus was, CoConspirators Brewing and Carwyn Cellars began harbouring a secret beer across several barrels. The Spy is an imperial rye beer that's been aged in aquavit, sherry and port barrels and after spending two years aging in wood, the conspirators blended their secret together, put it in bottles and dipped his head in wax for release in 2021 just as Melbourne hit its first cold snap of the year.

It’s a fitting beer for a cold night too, with the 12.5 percent providing a boozey warmth against its complex mix of fruit and spiced flavours. From the first pour, the initial notes are banana and non-distinct fruit cake flavours but from the first sip that gives way to more distinct raisin, sherry caramel, chocolate and vanilla notes. Let it warm and The Spy reveals more of his spicier side and while the beer may be big and slightly syrupy, there's little in the way of cloying sweetness so the barrel-aged imperial rye isn't one to overpower.