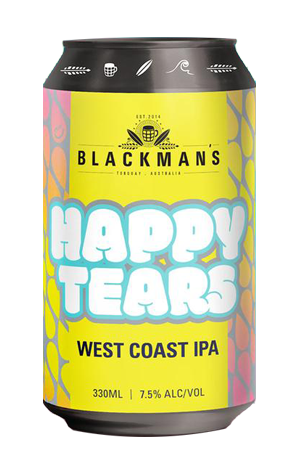 It's fair to say they've had plenty of practice crafting West Coast style IPAs at Blackman's over the past couple of years. Even putting aside the fact they've had Reginald in their core range since day dot, there's been a run since, say, Super Hop during which they've barely gone more than a couple of months without releasing a new one, not least since their Needs More... series kicked off.

While that series has focused mainly on single hop expressions, here they want to have hop fiends crying Happy Tears over a beer in which there's no such constraints getting in the way of creating a 7.5 percent ABV, contemporary spin on one of the beer styles to have changed drinking habits over the past couple of decades. Dive in and you'll uncover layers of hoppy goodness: juicy passionfruit, pineapple and rockmelon garnished with a little floral, potpourri bouquet on the nose, a sweet fruit mélange on the palate, and a balancing bitterness.

Leaving the brewery on May 14