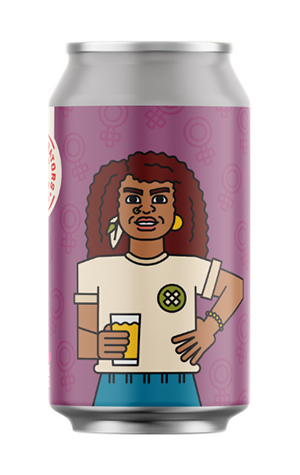 Apologies if you're learning about this for the first time on these pages, but there are some major issues in the world. It’s warming up for one, inequality is rife, and there’s been this nasty pandemic gripping the planet for well over a year now. What’s worse is that, despite all the disruption, the world’s still getting hotter and inequality and social injustice remain powerful. Change at a government level can be slow too, and often institutions need to be dragged there by an even more powerful force: protest.

Which brings us to CoConspirators, who look to pay tribute to those who protest and smash glass ceilings with their latest beer, The Activist; it's a rye IPA brewed using the most recent Pink Boots Hop blend, which features Cashmere, Ahtanum, Citra, Loral and Sabro hops. The combination in this beer brings a mix of oily and resinous pine, sherbet orange, something herbal and some difficult-to-define tropical notes too. The use of rye provides a decent hit of spice and, along with a substantial bitterness, The Activist sticks around once they’re gone from the glass.

As for the warming of the planet and the wider woes of the world, we might hope they'll disappear suddenly but it seems unlikely if more of us don't become active.