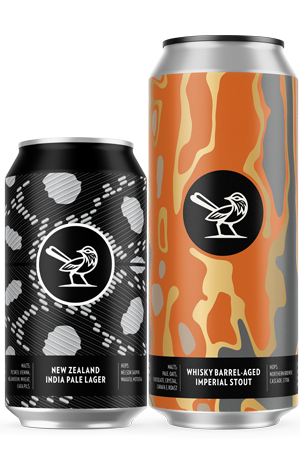 As winter ebbs away, Boston deliver a pair with one foot warming next to a cast iron fire, the other dusted in beach sand and sunlight. At the time of writing, wistful longing for the latter takes priority, so we begin with New Zealand India Pale Lager which fizzes with Nelson Sauvin, Wakatu and Motueka hops. Perfumed tropical aromas herald thoughts of warm air, which extend through orange notes and NZ grassy hoppiness on the tongue towards the clean, bitter and lengthy dry close.

Meanwhile, the Whisky Barrel-Aged Imperial Stout aims for contemplative comfort, and increasing postulation as the glass empties. It spent six months in peated and unpeated whisky barrels, creating whisky, oak, prune, dark malt and chocolate complexity, as Belgian candi syrup caramel layers and integrated booze emote in a complex but very drinkable affair – one which ably enables solving all of the world’s problems. And one which will develop with considered ageing.

Available from the Denmark brewery