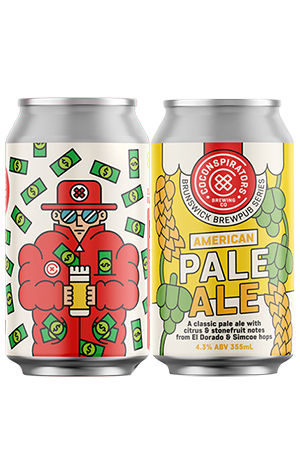 Since their Brunswick brewpub opened in the final weeks of 2021, it’s safe to say the team at CoConspirators have been busy. Having built that brewery with help from supporters via equity crowdfunding, the team was quick to invite those who chipped in to develop their own beer. Clearly, there must be IPA fans among those equity investors, with the resulting beer, The Investor, a West Coast featuring Australian Eclipse and American Mosaic hops. It seems too many chefs don't necessarily spoil the brew either, with The Investor a lean, dry and bitter affair with a mix of mandarin plus further citrus by way of orange, pawpaw, melon and pine.

Brewpub Series Pale Ale is the first can to be released from the brewery’s Brunswick home and includes a pair of hops in El Dorado and Simcoe. Pouring hazy, it's not too far from many modern hazy pales, with a limited bitterness and juicy blend of nectarine and citrus. You'll also pick up more traditionally American pale ale pine needles.

Also fresh from the Brewpub Series is Pilsner, which you can read about here.