But reality has a habit of casting such ideas aside and nowhere does that happen more clearly than at Cornella Brewery and The Shiraz Republic in Central Victoria. Located in the heart of the Heathcote wine-growing region famed for shiraz, calling into the farm here isn’t like your typical brewery visit.

Indeed, as you drive down the dusty driveway delivering you to your destination via a field of grapevines, you might wonder how craft beer and not wine lies ahead. Then again, if you time your visit right, you’re as likely to be welcomed by barley destined for Cornella’s beers.

The folks responsible for enticing you down said dusty driveway are Spencer Page and Matt van Run, two mates who met at high school in Melbourne and used to spend weekends working on the farm just north of Heathcote that Spencer’s parents bought in the mid-1990s. It had been a grazing property but, by this point, was in need of some TLC. Once a new water pipeline had been installed at the start of the century, the family instead planted vines in the rich volcanic soil and The Shiraz Republic was born.

As the Republic in the name suggests, there's a touch of the political at the heart of the winery that's driven by an ideological commitment to the democracy of wine. It's an ethos that's all about opening up their world to one and all, whether through their relaxed cellar door, or the Rent-A-Row program which turns citizens into wine tsars.

It all makes for a great story about a fascinating winery but, given you’re reading this on The Crafty Pint, you may well be wondering where the brewery comes in, which requires a temporary detour to the UK…

Although Spencer and Matt spent many hours on the farm growing up, their decision to create a beery fiefdom within the Republic was spurred on by the semester they spent at university in Manchester in 2014. While there, their eyes were opened to the wider world of beer, so upon returning to Victoria they took over part of that winery and started homebrewing.

The plan was just to make beer for themselves, but when cellar door visitors spotted stubbies and made enquiries, occasionally they’d hand one over and be met with praise. Thus, in 2016, the pair decided to take things to the next level: they bought a 200-litre brewhouse and a few fermenters; over time, those tanks grew to the point that, in 2022, they upgraded to a 1,000-litre system.

Initially, their focus was on replicating the real ale movement of the UK but, today, Cornella explore the wider world of modern craft beer. That said, a best bitter remains part of their core range alongside a lager, XPA, Kolsch and NEIPA that were part of a rebrand that also saw them start spreading their wings further and sending beer across regional Victoria and into Melbourne.

Unusually for craft breweries (but certainly common for winemakers), the Cornella beers make full use of their farming environment. Paddock to pint is a concept to which they’re truly committed: among the crops they grow is Planet barley that’s sent north to Voyager to be malted after each harvest.

If at this point you figure the tiny town of Cornella sounds like some kind of producer paradise then you’d be right – visiting the farm certainly feels like a trip into a utopia of beer and wine.

The beer garden that welcomes you can comfortably host hundreds of guests – families and pets included. As well as large picnic tables beneath sprawling eucalyptus trees, there’s a pool table and stage set up on the back of two old Bedford trucks which plays host to live music performed by artists from Central Victoria and Melbourne. As pizzas fly out of the kitchen and your eyes drift between live music, rusted farming equipment scattered across the lawn and the nearby vines, the vision is one of serenity.

And that’s all before you've stepped inside the bar and cellar door. This sits somewhere between a saloon and a grand hall in an old country town, complete with more relics of Cornella’s past, wine barrels, another pool table and yet another stage.

If it sounds like a place you won’t want to leave, then you’re in luck: there are units that look onto the vines and a further accommodation option in Bill’s Shed, which wasn’t just once home to Bill but also used to house the town’s post office.

There are 20 taps in total and it’s not uncommon to spot groups walking to the bar for a flight of wine and emerging back into the beer garden with a paddle of beers instead. The fridges are always well stocked with Cornella beers, alongside canned pet nats, spritzers and bottles of more traditional wines.

Take a look at Cornella’s cans and you’ll spy their own ideology spelled out in the simple tagline: What A Good Idea!

Given the brewery and winery’s impressive shared story, the way the beers and wines are connected to the rich soil beneath your feet, and just how captivating a visit to Cornella can be, it certainly feels like a good idea. And, you could argue, like democracy manifest. 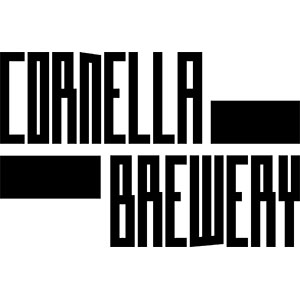 A nanobrewery and tiny hop farm join forces this weekend to launch their collaborative Wet Hop IPA as part of a mission to show Heathcote can be known for more than Shiraz. We spoke to Skull Gully Hops and Cornella Real ahead of the launch. Cornella Brewery's founders fell in love with beer in the UK and when they first launched their brewery, their focus was on the kind of real ales Spencer and Matt enjoyed in Manchester's many many pubs. So in some ways, Sick Kent is a return to their roots but while it was originally only meant to be a limited-release, it seems country Victoria caught up with the Cornella's brewers and the beer's surprising popularity saw it graduate to their core range. Per its namesake, it showcases East Kent… Read more
Golden The story behind most breweries’ core lager is much the same; its primary function is to be an option for the rusted-on, traditional Australian beer drinker. The kind who made their choice of beer, often determined by nothing more than geography, sometime in their late teens and has consumed nothing else since. To leave the story there takes much away from these lagers. For they are often more than their domestic counterparts and tend to be much more nuanced than this narrative alone suggests. Of… Read more
Pale Yellow There might be many examples of kölsch ales in Australia but few actually feature the style's name these days. Breweries have been reluctant to complicate the traditionally simple product, erring instead for simple descriptors, such as refreshing ale, rather than foreign style names. But at Cornella Brewery, they love to spruik this beer's traditional German roots and an even better selling point for them is the beer's mid-strength alcohol content. Indeed, it's the lower ABV that necessitated this… Read more
Golden Yellow When the XPA pseudo-style first appeared there was little consistency in the beer from one brand to the next. For some, ‘X’ signified extra hops or extra pale, and for others, even extra booze. Cornella Brewery’s first XPA, named XPAlidocious, fit the latter of these interpretations. Circa 2016, a small Gold Coast brewery released a refreshing, dry-hopped pale ale. The beer has gone on to become ubiquitous across Australia and set expectations in the minds of consumers for what an XPA should… Read more
Golden Yellow 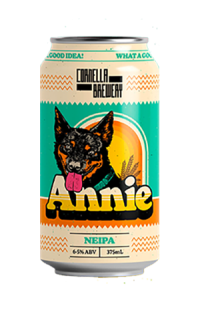 Annie The Wine Dog is Cornella Brewery’s resident cattle dog. On her Instagram page you can see her pruning the grape vines and driving the tractor, but her actual role is PR. On any visit to the brewery you’ll see her mingling and schmoozing the patrons. Throw a stick, and she’ll dutifully fetch it. Annie also has a beer named after her. Annie NEIPA is a pale gold, suitably hazy, New England IPA. The current release is double dry-hopped with Citra and Galaxy, giving it magnificent tropical… Read more
Golden Yellow Nowadays, making great-tasting beer isn’t always enough to be memorable. As the Australian brewing industry has matured, we’ve become more spoilt for choice in terms of quality. "Brand story" or "narrative" is the vernacular in the marketing world, and in a country pushing 600 breweries building one is critical to standing out. Cornella have always imbued their beers with character. One might argue the brewery’s unique rural setting makes this a doddle, but a less savvy… Read more
Golden Cornella Brewery are always keen to brew en vogue styles so it seems only natural for their attention to turn to one of IPA's coolest cool kids, the cold IPA. As we’ve explored here, the style is typically brewed with lager yeast, and fermented at above-normal temperatures. Does that make it an IPL? Detractors would argue yes but then advocates see it as more bitter than a classic lager and sitting more like a cleaner West Coast IPA than a hoppy lager. First brewed for Bendigo On The Hop, Cold… Read more
Pale Yellow