What’s more normal than sharing a beer to celebrate one of life’s most joyous moments? And if you still have the beer, the joy, the occasion, yet none of the alcohol, is the moment any less important? Surely not.

It’s that question raised by the brewing company Heaps Normal, which launched during 2020 which, aside from a pandemic, did serve up a few positives. Certainly, for craft beer fans looking to cut back on their alcohol intake, the growing prominence of alcohol-free beer was a big old tick in a column that we can call positive developments.

Sure, 2020 wasn’t the year alcohol-free beer was invented, with local offerings and imports available on these shores well before then. But the start of the new decade seemed to herald the start of a new era for the category in Australia, with brewing companies looking to offer more variety to those who chose not to drink, or for those who want to cut back, if only a little bit.

Which brings us back to Heaps Normal, who have made it their mission to change drinking culture. Their tagline of “too good to be wasted” captures the essence of that mission, making it clear that those moments where beer is often seen as an essential ingredient – a wedding, a gig, a barbecue, for example – don’t have to automatically feature alcohol too.

Like so many origin stories in the craft beverage world, Heaps Normal’s begins with a group of mates who shared a lot in common and wanted to encourage people to drink and support independent beer. The difference for the four mates behind Heaps Normal was their feeling that drinking local beer didn’t have to equate to drinking more booze.

Andy Miller had been working in the local beer world for many years and, eager to find a way to cut back on his own drinking, found the option of soft drink at a pub pretty unappealing. Designer Pete Brennan had grown up in the shadow of alcohol abuse within his own family, while pro surfer Jordy Smith had been staying away from alcohol in his pursuit of glory in the waves. Finally, brewer Ben Holdstock, who had previously worked at 4 Pines and Grifter, was keen to put his technical knowledge to the test to see if he could produce an alcohol-free beer he’d be happy to drink.

Launching with their flagship Quiet XPA, the classically-minded can design puts the Heaps Normal mission front and centre, pushing the idea that dialling up the flavour and experience can be achieved without dialling up the booze content.

The Heaps Normal story doesn’t start and end with one beer, however, with Ben working to produce limited releases for the brewery. The first of these put the Heaps Normal crew’s love of music to the forefront, with Isol-Aid Haze – a collab with Blackhearts & Sparrows – raising money for the Isol-Aid Festival, which supports musicians struggling through the pandemic.

And, while AF brewing is at the heart of everything they do, the Heaps Normal focus hasn’t been solely on those choosing not to drink but also those looking to drink a little less. Their Normal July campaign that debuted in 2021 encouraged people to do their best to cut back a little all the time rather than cutting out booze entirely for a month (which tends to come with big nights either side of the fast).

At time of writing, Heaps Normal beers are brewed at Brick Lane but following an $8.5m fundraise in 2021, the founders are eyeing up potential sites for a brewery and taproom in Sydney.

In a country where alcohol and celebration tend to be intrinsically linked, it’s easy to wonder if Heaps Normal’s goal of changing and challenging those links could be an impossible one to achieve. But remember when the entire craft beer movement was considered a fad destined to fade? It wasn’t that long ago, and look where we are now – with alcohol-free XPA and IPA as part of the most eclectic, welcoming-to-all beer landscape ever seen.

Alcohol-free beers – and other beverages – are becoming an increasingly visible part of the local drinks industry. As Heaps Normal prepare to launch their non-alcoholic XPA, we got in touch to find out more.

Uraidla Brewery landed two beers in the overall top ten best Australian drinks at the second Drink Easy awards. They were joined in the best of list by Heaps Normal's Quiet XPA, flying the flag for non-alcoholic beers.

The Year Of No Booze

In 2020, Australia witnessed the launch of a number of alcohol-free brewing companies and brands, and in 2021 sales rocketed, quality rose and options blossomed. As 2022 starts, look at why booze-free beer has struck such a chord.

What if every single thread of your beer merch was made from recycled cotton and recycled drink bottles? We caught up with The Common Good Company for a chat about their high quality apparel with a low impact on the planet. 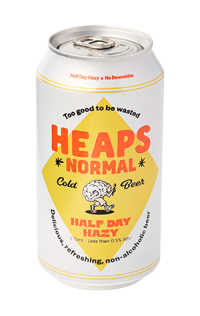 December can be hard going if you work in hospo or retail, but if your job mostly involved sitting at a desk, it can be the start of a welcome wind down. Indeed, as the end of the year draws closer and closer and the weather starts to pick up, how can you seriously be expected to concentrate after midday? At the (highly likely) risk of this being read by my employer, December’s a time for half days. [So that's what's going on... Editor] Knocking off early is precisely what Heaps Normal are celebrating… Read more
Pale Yellow Much like the wider non-alcoholic beer category, the rise of Heaps Normal has been impressive to watch. The brewing company launched midway through 2020 and quite quickly started appearing not just in pubs and regular beer haunts but also in organic grocers, bakeries and has even become the top-selling beer in certain bottleshops. For 18 months, it was really a single beer doing all that work too, with Quiet XPA the flagship at the centre of Heaps Normal's stated aim of getting Australians to think… Read more
Pale Yellow

Another Lager is available from retailers across Australia from February 1. As much as beer can be a social drink, a quiet beer can be a wondrous thing. Whether on the couch or at a bar, the experience of cracking open a can, or sitting there with a glass in your hand, and just letting yourself be with your thoughts whirring away can be a true pleasure. But what if you’re looking for that quiet beer and don’t want it to slow your thoughts? Or what if you’re keen on the beer and the social activity but don’t want the other effects of alcohol? Heaps Normal’s answer… Read more
Pale Yellow