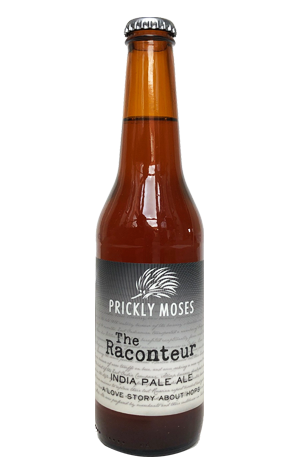 Back in 2011, Raconteur was Prickly Moses' first IPA. It's a beer that had then brewer Hendo hot under the collar, hot enough to describe it as a beer that "tells the classic story of American India Pale Ale with hops the protagonist. A hop driven beer in every way, hops are added throughout the entire brewing process from the mash tun to the kettle and even the fermenter."

The hops in question are the classic "Three Cs" - Centennial, Chinook and Cascade - and contributed to what was the hoppiest beer Prickly Moses had produced to date, a beer created in part as an experiment to see how much hops the brewhouse could handle. It proved popular enough to return as a seasonal before graduating to the core range.

It leads off with lively, sweet, sherbety citrus hops – think candied lemon and orange, with some pine in the background; get hold of it fresh enough and it's like chewing a mouthful of hops. There's a pretty solid bitterness and a very dry finish too, in what's a hazy, deep copper throwback to the American IPAs of yore.