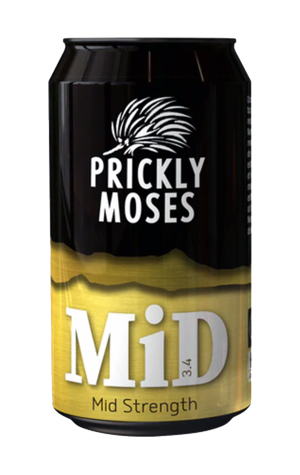 Over the past half decade or so, the world of the mid-strength has changed markedly. Not only have such beers become far more central to most breweries' thinking, but in many cases it's become a space in which brewers have strived to replicate the character of much bigger beers – whether via flourishes of hop-derived fruitiness or greater bitterness. To that you can add the arrival of fruity sours, many of which sit below 4 percent ABV, not to mention the growing trend to go even lower and make enjoyable light and no-alcohol beers.

With MiD, however, Prickly Moses are following a more traditional path, a 3.4 percenter added to their core range as autumn turns to winter. Character wise, this is more in your Euro lager, kolsch or English golden ale territory: bready malts, soft, mainly floral hop aromas, low bitterness, and some yeast-derived fruity esters.

It makes sense as the brewery is one that's typically played at the more restrained end of the styles they've brewed over the years – and that’s no different here as they aim to give drinkers another simple, easy-going option.