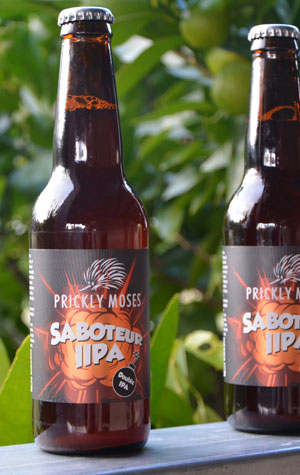 Several years ago, when head brewer Luke Scott was joined by a pre-BrewCult Hendo at Otway Ranges brewery Prickly Moses, they added a series of colourful releases to the brewery's portfolio that were usually a step up in booze and character from their more approachable core lineup. Among them were beers such as the Tailpipe American brown, Black Panther black IPA and Raconteur, an IPA with the subtitle "A Love Story About Hops".

Presumably, given the similarity in names, the brewery's winter 2017 release is updating that love story six years on. Saboteur is an imperial IPA we're told comes packed full of American hops, borne upon a "medium bodied malt backbone with warmth on the palate from the high alcohol content". If Raconteur suggested it was aiming for the hearts of hop lovers, this one is apparently "not for the faint hearted". At 10.4 percent ABV, even without having sampled it yet, we'd be inclined to agree.