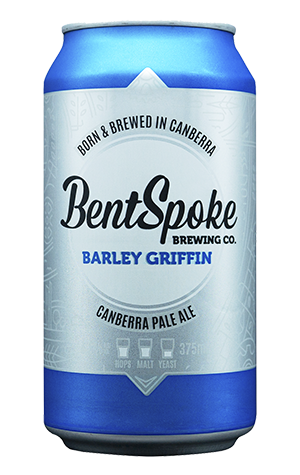 A BentSpoke regular that takes its name from the artificial lake at the heart of Canberra, Lake Burley Griffin. In late 2016, it became one of two beers chosen to be packaged in cans. Tagged as a "Canberra Pale Ale", it sits firmly at the sessionable end of the pale ale spectrum, weighing in at just 4.2 percent ABV.

The beer pours a hazy pale straw colour – or "cloudy but fine", according to the brewery team in another reference to the place in which it is brewed – and delivers a mix of tropical, grassy and herbaceous hop aromas. It's light and crisp on the palate, with something of a pithy, resinous bitterness adding to the refreshment quotient.