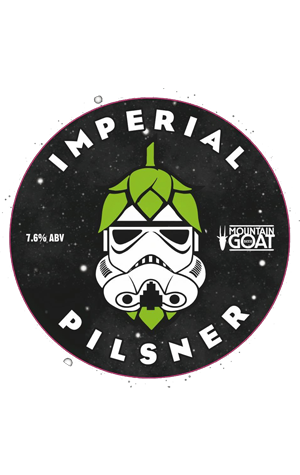 Somehow, given their growing popularity across the land, Mountain Goat recently found themselves with time to leave a couple of tanks full of beer for a few weeks. Thus they filled both with an imperial pilsner. The plan, after some experiments on a small scale with a friend from the world of gin, was to see how an imperial gin pilsner might pan out. Sadly, the juniper berries didn't like the beer; happily, only one tank was used for the experiment so, while there were tears (gin is called Mother's Ruin, right?) there was a big tank full of imperial pilsner that was free of juniper berries and had been given an age to condition.

So, what do we know about this rarest of things: a lager from Mountain Goat, other than the fact they released it to coincide with Star Wars day (so we're a little late in getting it on here)? We know that, other than its size – 7.6 percent ABV – they aimed for the traditional: 100 percent pilsner malt and German Hallertau and Czech Saaz hops plus a classic Bohemian yeast. Says head brewer Dave Bonighton (through his gin-riddled sobs): "There's a really, really grassy hop character from the Saaz, it's got a bit of weight on the palate, but it's still really crisp and dry." There were only a few kegs released so hopefully we got this out in time; look out for the goatee'd, hop hat-wearing Storm Trooper decal...