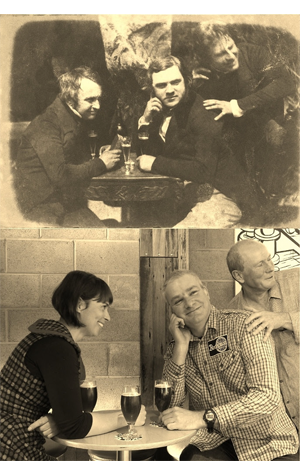 With their first birthday falling on the Queens' Birthday long weekend, BentSpoke figured they'd treat their customers to more than one birthday beer. Four, in fact. One was released each day from Friday to Monday, with the first to be tapped the third in a series of historical beers created in partnership with local beer historian David Hughes (pictured below right). Blow Your Bagpipe is a strong Scottish ale, which follows the tasting notes of David Booth, from the Art of Brewing, published in 1829. The beer was brewed with fermentation at low temperatures for a fortnight and features East Kent Goldings hops and Maris Otter pale ale malt, with a wee bit of crystal malt and peated malt to give a dark orange hue. The result is a "strong but smooth 8.9 percent, malty, gently hoppy pale ale".

The other three birthday beers are Black Tyre, the 15 percent ABV dark beer Descent 15 and finally Dark and Sour, described by head brewer Richard Watkins as having "roasty sweetness and subtle leathery sourness ... like a cross between dark jelly beans and a hint of lemon warheads."