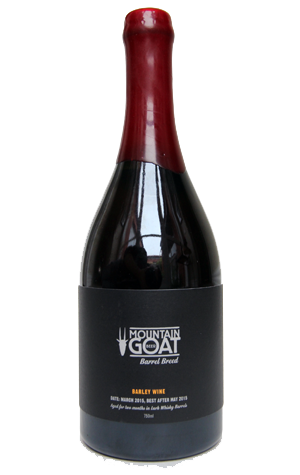 From a business sense, as Goat co-owner Dave Bonighton pointed out to us recently, if you're going to win the top gong at the Australian International Beer Awards – that of Champion Australian Beer – you don't necessarily want it to be for a beer of which you have bugger all and would be hard pressed to recreate. On the other hand, as you approach your 18th birthday as the oldest microbrewery in your hometown, it doesn't hurt to take out such a title with a beer that shows the young pups you can still teach an old goat new tricks.

Prior to the winners being announced last month, we were chatting to one of the AIBA judges. He told us that, for the first time, all of the judges had been allowed to sample the beers that had been put forward for the final round of trophy selection. He said that some of the bigger, darker beers, "especially in the Scotch Ale and Barley Wine category" were so good that you'd taste them and accept you simply couldn't make a better beer. All of which suggests Goat's first attempt at a barley wine, first venture into whisky barrels (from Tassie's Lark Distillery) and biggest beer ever is pretty damn good.

As alluded to at the top, however, there's very little around. A few of the wax-sealed 750ml bottles have landed at a handful of venues although we're told some may not make the shelf and instead be held for special occasions. What little was tapped at the brewery bar may have run out by now (although we suspect there may be a keg or two stashed away for future special occasions so keep eyes and ears peeled). So should you want to taste it, vigilance may be required.

The beer itself started out at 11 percent and with a pretty simple makeup – two malts and two hops – before being added to the barrels, in which there was still some whisky sloshing around. After two months, it was extracted and had risen to 12.9 percent ABV. Once in the glass, it's a hazy ruby amber colour drop best sampled warmer that's awash with rich, creamy toffee malts, sweet stewed fruits, oak, vanilla, a touch of whisky and sherry, and some softly spicy booze all of which warms in the sultry manner of a Caribbean summer's eve.

On the plus side, if you miss out on this Goat's second Barrel Breed is due for release soon. It's an imperial stout and a little birdy told us they reckon it could be better still...

Limited stock at the brewery (maybe)

One keg to Royal Albert Hotel for August Goat event

Plus bottles (sometimes singular) at:

Or ask nicely at your favourite Goat stocking beer bar