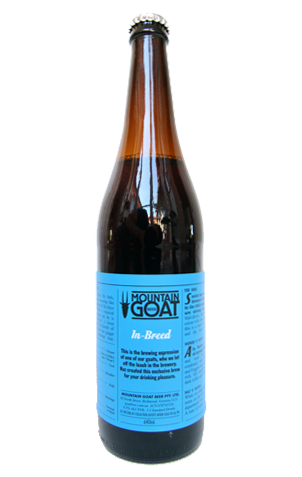 One of those making beer there for longer than most is Naz, or Shane Edwards to his mum and dad, who joined as a pizza maker and barman before leaping across the floor to the brewery at the start of the period during which Goat has enjoyed its greatest growth. He's brewed a couple of keg-only Nazes (or should that be Nazzes?) before, which took the form of a mocha porter and an "even crackinger" mocha porter. This time around, however, his beery alter ego is getting the In Breed bottle treatment.

He's come up with a different beer, albeit one that again favours malt over hops: a Scotch ale. And, fittingly for a beer inspired by the land of the battered Mars Bar and tablet, it's one for the sweet-toothed. A blend of chewy specialty malts creates a deep brown brew that's a veritable Highland coffee shop dessert trolley laden with toffee, clotted cream, cake batter and raisins, all wrapped up with a toasted nut finish. Och aye, laddie, it'll put hairs on your chest (and possibly an inch on your waist).

Then keg and bottle at good beer stockists nationwide