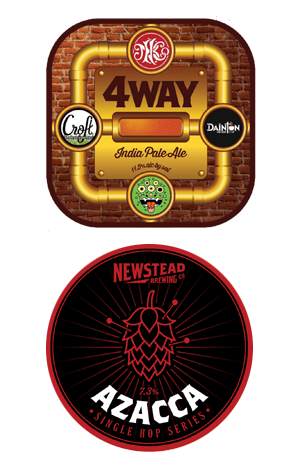 What do you get when you put four brewers with a penchant for experimentation and rule-breaking together in a brewery? In the case of the 4-Way, a beer we're told is "best enjoyed seated". Why? Mainly because this collaboration between Newstead, Craft, Dainton and Kaiju! weighs in at 11.5 percent ABV and, with heaps of hops swirling within its beastly body, it's being tagged a "Quadruple IPA". Said hops are Azacca added at 15 minutes, Riwaka at five minutes, Motueka in the whirlpool and Columbus as a double dry-hop. Look out for it receiving a four-way Melbourne launch on May 8 at The Catfish, Dr Morse, Up In Smoke and East of Everything.

It's not the only highly hopped beer out from Newstead right now, either. They've also just released kegs of the Azacca Single Hop IPA, one that also has plenty of booze and a silly amount of hops – they're estimating 112 IBU [International Bitterness Units], which is supposedly above the upper range that most mere mortals can detect. Perhaps that's the point as US hop Azacca is named after a god, one who enjoyed sex, food and booze.

The brewers tell us the beer has a "big, bold, tropical fruit character" that's joined by "a strong piney note, oranges, paw paw, mango and some spice."

And a handful of other craft venues