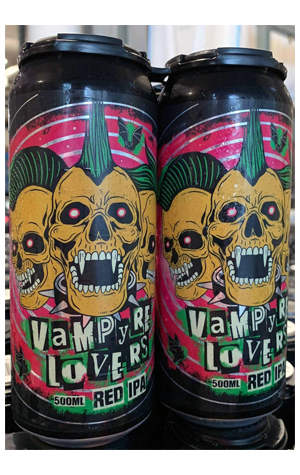 What kind of beer would a vampire drink? It's a question that has plagued mankind (me) for much of human history (the last six minutes). And, given this little write up is specifically in relation to the Newstead Brewing Co/Akasha collaboration beer, Vampyre Lovers, it’s probably easy to jump to the conclusion that a blood-red IPA is the aperitif of choice for the blood drinking undead.

However, dear reader, you may have fallen into a classic trap that I have fiendishly laid in your rather predictable path. I put it to you that even arch-vampire Dracula (pronounced like West Coast Cooler) himself, despite the undeniably awesome skulls on the tin, would reach for a different beer entirely.

Let’s get back to basics here: why do vampires drink blood? European folklore says that vampires would rise from the grave to feed on the vital essence of the living. What is the vital essence, I hear you ask? Well simply speaking it’s an unknowable, non-physical medium akin to a lifeforce or soul. Essentially, it’s a load of old bollocks and no self-respecting vampire is going to go to the effort of killing some poor chump just to suck some sort of weird nothingness out of them. Let’s be real for one goddamn second, vampires are drinking blood. And they’re drinking blood because it contains essential nutrients, calorific content and it’s cool as hell.

But what nutrient specifically does blood offer that say, a nice glass of milk, does not? If we look to nature’s other blood-drinkers we may find ourselves a clue. Mosquitoes are probably the most notorious drinkers of human blood, so why the bloody hell do they do it? It’s not just because they enjoy ruining everyone’s lives, it’s iron. We’re generalising a bit here given there’s 3,500 species of mozzies but, of those that need a blood meal, the females need that iron to help with egg production.

So, coming back to the original question, what beer would a vampire drink? The University of Valladolid in Spain concluded dark beers contain more iron than pale or non-alcoholic beers. Therefore, while a red IPA might be more appealing than a straight up crystal-clear West Coast banger, a black IPA, porter or stout would have to stand ahead of the pack.

That being said, beer contains thousands of times less iron than blood per millilitre so, really, if a vampire is going to drink a beer, it’s probably just to put its next victim at ease and to disguise the ever-growing thirst for the blood of the living, thus rendering this entire conversation pointless.

Vampyre Lovers is a big old red IPA of yore absolutely rammed full of some of the newest US hop varieties, Sabro and Bru-1. Sabro in particular, has gained a lot of love in NEIPAs and milkshake IPAs for a strong coconut, vanilla and tropical fruit vibe while Bru-1 provides some clean bitterness, pineapple and melon.

It’s an interesting combination for a relatively malt forward IPA but it really works. There’s a hint of smooth coconut cream, a sort of Bretty-pineapple and loads of citrus. Combined with the malt, there’s an almost breakfast cereal vibe going on, and I dig it. I also got a noticeable bit of minerality and, most pleasing of all, a long, deep bitterness. It’s not astringent or intense but it hangs around for a while after each sip. The beer is a positively terrifying 8 percent ABV and, honestly, after a couple it certainly feels like you’ve been exsanguinated.