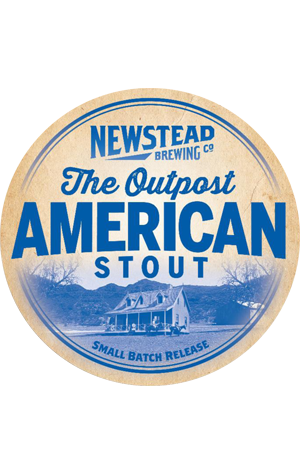 Newstead's brewpub setup must be one of the most heavily frequented by other brewers. With most of their core range production handled under contract, at least until their large second site is up and running in the coming months, they're free to play around at home – and play around they do, not just on their own short run releases but in collaboration with locals such as Croft Brewing and those from further afield, including KAIJU! And it's KAIJU! who has offered Newstead brewer Mark Howes the chance to play away from home – and pop some of the resultant beer into bottles.

The beer is The Outpost, an American stout that does what Americans tend to do to beer styles: add more hops. Thus we're told that this combination of darker malts and punchy US hops results in "the best of both worlds", which the Newstead scribes say means "biscuit, caramel, dark chocolate, coffee, pine, lemon zest and melon" coming together in a "cacophony of flavours".

As it was brewed in Melbourne, it's offer the Brisvegans a chance to target the Melbourne market with Mark heading to a series of launches. We missed the first, but you can still catch him and his stout at The Terminus tonight (July 6), Markov on July 7 and then at six days of launches back in Brisbane later in the month.