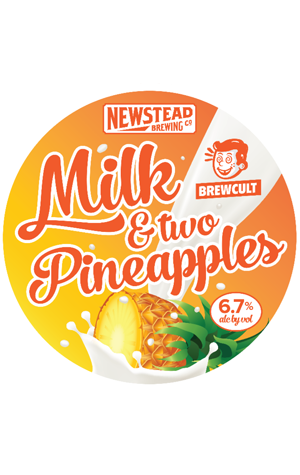 Another collaboration from Newstead Brewing and one that is kind of a tribute to the collaborator too. In hooking up with Hendo from BrewCult, they've offered a nod and a wink to one of his past glories, the GABS People's Choice winner from 2015: Milk & Two Sugars. Where that was an espresso'd and lactosed to the hilt sweet stout, this time around it's a lactosed and pineapple juiced affair, with the base an IPA rather than a stout.

While we've not tasted this one yet, if you're after a point of reference it sounds a little like Moon Dog's popular Slice of Heaven "Splice" IPA: a beer that combines the innate hoppy, fruity bitterness of a sizeable IPA (in this case hopped with fruity varieties Citra and Waimea) with more fruit in the form of juice and unfermentable milk sugar that is typically used to add creaminess and sweetness to some stouts.

It's described by Newstead as something of a journey into the unknown, one in which "the bitterness from the hops surprisingly balances the sweetness ... resulting in a juicy but refreshing" drop.