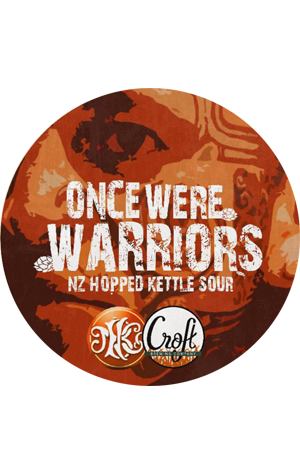 Newstead and Croft Brewing have been at it again, heading into the brewery to knock out a fifth different kettle sour. Once again they've plundered the world of movies for its title too, although following the druggy and psychedelic prior choices: Fear & Loathing, The Naked Lunch and so on, here it's Once Were Warriors, a film that sears itself on your retina rather than wheedling its way into your third eye.

Presumably the naming was driven by a couple of things: the choice of a Kiwi hop (whole cone Wai-iti) as the sole hop variety and also because they reckon that, like Jake the Muss, it packs a punch. Indeed, they reckon it's like "a pure glass of pineapple juice [with] a punchy tropical hop aroma with a mild bitterness and tangy acid that lingers will help you ponder the choices of life."