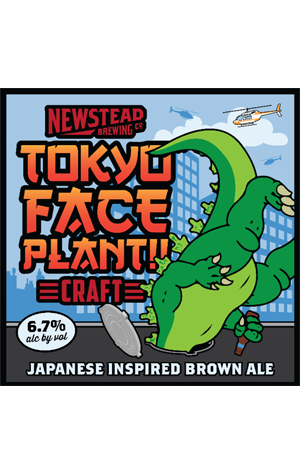 It's a beer name that instantly suggested: "In joke" and a read through the tasting notes provided by Newstead Brewing would seem to confirm it as something along those lines. Tokyo Face Plant is a collaboration between the brewery and one of Brisbane's best bottleshops, Craft Wine Store, in Red Hill, and appears to have been named after an event involving one of the store's staff, a trip to Tokyo, a face plant, some broken specs and a U2 reference. And the beer chosen to bring those disparate elements together in your glass is a "Japanese Brown Ale".

Well, in this case it's a brown ale – one with a hefty amount of booze in it – that has been decorated with that most idiosyncratic of hops, the Japanese developed Sorachi Ace (as well as some US Cascade). According to the Newstead crew: "With loads of caramel, biscuit, rye and chocolate malts, the first thing you notice is the beautiful colour, brown with orange highlights and a golden reflection. The aroma is malty sweet and spicy with a punch of fresh lawn clippings, lemongrass and grapefruit. The biscuit and chocolate flavours hit you up front followed by the citrus and pine from the hops."

You'll find the beer pouring at Craft as well as a handful of venues around Brisbane.