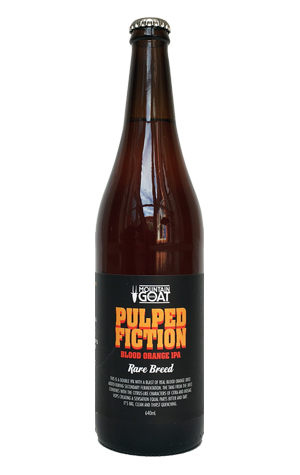 Few would have predicted that, in the first year after Asahi took ownership of Mountain Goat, its Richmond brewery would knock out more Rare Breeds, Barrel Breeds and other draught only releases than in any previous year. But, with most of the brewery's beer brewed off site at Asahi's main Victorian brewery, the freedom has been there for the brewers to do so – and it's freedom that's been granted and then taken full advantage of.

For the most part, the Rare Breeds have put hops front and centre (well, the craft beer world is living through an era of IPA, after all) and that's the case as they sign off for 2016. Pulped Fiction adds "Blood Orange" to the prefixes that have been attached to IPA by Goat over the years – and also represents a change in direction looks wise for the series; out go the text heavy labels for something mimicking the Tarantino classic's appearance (with Blood Orange appearing as himself).

It started out as a single keg experimental brew by newly anointed innovation brewer Alana Rees and proved so popular it was upgraded. And, while it's an IPA, she's built a solid backbone of specialty malts too – including the variety Goat developed with these folks – creating a seriously alluring blood orange-ish hue. When it comes to consumption, however, those malts provide balance, body and booze but leave the hops and fruit to bring it all home in citrusy, zesty style.

Indeed, if you're a hop fiend who's shunned Goat since the takeover, this may be reason to take heed of Marcellus Wallace: "That's pride fucking with you. Fuck pride. Pride only hurts."

Launched at Mountain Goat Brewery on December 16 then nationwide