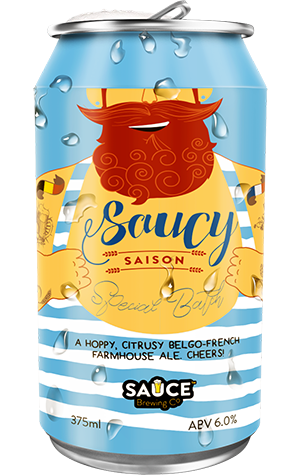 Sauce’s third beer release and first ever seasonal was decided by democracy, which is to say they put a vote out on social media asking their followers to choose what style of beer they should brew next. That there was a resounding winner isn't necessarily a surprise. That it was a saison perhaps is. Anyway, they’ll be glad it won't because the ensuing beer, Saucy Saison, is rather lovely.

It’s a bit of a blend of a beer, doffing its cap to yeast-driven French-Belgian saisons and using some old world hops, but those are then boosted by some from the new world. Up front there are plenty of peppery characters and yeasty esters on the nose while on the palate it’s mainly about the citrusy hop character that also helps the beer finish crisp and dry. This is a beer that feels good to drink, light but creamy and full at the same time. At six percent ABV it’s got just a faint touch of alcohol to keep you on your toes.

While the Saucy Saison came and went quickly upon its first release at the end of 2016, requests for a re-release meant it got the honour of being the first limited release to be put through the new canning line when the Marrickville brewery opened, so don't be surprised to see it around a little more often.