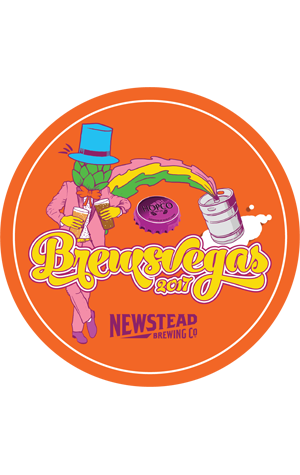 Each year, not only does Brewsvegas bring the good times to Brisbane for a week and a bit of marvellous beer events, it brings out a commemorative beer too. Sure, it's not going to stick around like the mug your gran got to commemorate the wedding of Charles and Di, but you can be sure it's got better taste.

For 2017, they enlisted the services of Newstead, who took time out from building a whopping new brewery and showing off all their trinkets on social media to knock out a brew that ticks plenty of beer geek boxes; well, the ones marked new hop, kettle sour and single hop anyway. Thanks to Hopco, they got their hands on the much-hyped Idaho 7 (which some of you may have tasted in the rather lovely Cavalier Idaho IPA last year).

The brewery claims to have gone "the full Newstead" on it, stating that "we brazenly threw IPA amounts of this tropical, grassy, perplexing hop at a lactobacillus soured golden wort" and that the outcome is "a green pineapple, tropical, citric and resinous sour ale." Try it first at the Brewsvegas Pool Party then at participating venues afterwards.