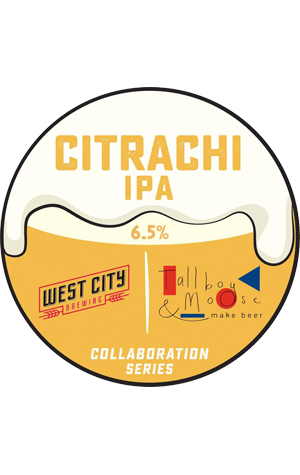 One of the in-house policies at Preston's new brewpub Tallboy & Moose is to offer a tap or two to guest brewers. Usually, it's done by means of a keg swap that sees the other brewer put a keg of Dan and Steve's beer on at their venue. In the case of Citrachi, it's a partnership that's a little more direct: they joined forces with West City Brewing to create a single beer together.

That beer is Citrachi IPA, one that most readers of this site will be able to decipher pretty quickly: it's an IPA featuring Citra and Sorachi Ace hops. Another thing visitors will notice at the brewpub is a fondness for creating beers with sessions in mind and, while this beer registers at 6.5 percent ABV, it retains an element of sessionability in that all of the hops were added late so bitterness is kept to a minimum. Instead, they contribute heaps of predominantly citrusy aromas and flavours (there's some citrus peel chucked in there too) to what is an undeniably juicy drop.