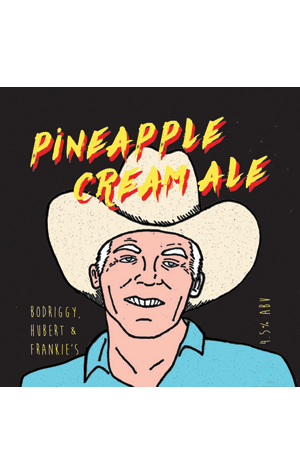 Sydney CBD late night hangout Frankie's has forged quite a relationship with the craft brewers of the country, both in terms of leading them astray during beer festivals like an irresistible Pied Piper for (pretend) grownups and when it comes to hopping into bed with them for collaborations. Often, the two come hand in hand, with said collaborations created for special events during beer festivals. But not this time. Here, it was a case of the guys at Bodriggy and Frankie's / Hubert's being good mates and deciding to seal their bond with a beer. A pineapple beer, no less.

It started out as a classic cream ale (a style with origins in the US that is typically a cold fermented ale not a million miles from a pale lager) into which was added 35kg of real pineapple post ferment. On top of that, they threw in some lactose (milk sugar) to up the creaminess too. And, if that sounds like your kind of thing, you'll have to hunt it down on tap as it's a draught only release.

Frankie's By The Slice