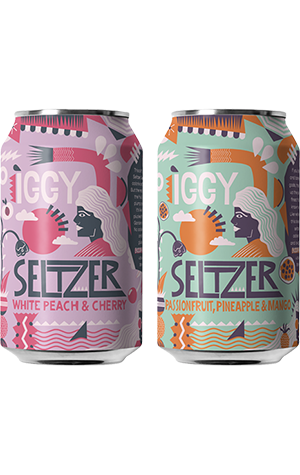 Like many breweries that have expanded into the seltzer market, Bodriggy’s entry into the sparkling soirée has seen the Abbotsford operation launch a new brand for it. But Iggy Seltzer might have its own name and tagline of No Biggy With an Iggy (presumably channelling the Instagram influencer and wildlife supporter named Biggy Pop, who happens to have a famous owner) but the new Iggy isn't too far removed from the wider Bodo look and feel. Largely that's thanks to the tins themselves where you'll find the same kind of whimsical, colourful and slightly Rorschach-esque design of many of Bodriggy’s releases.

As for what the new Iggy's entail, you have two fruit-filled releases in the starting lineup, with both low in gluten and made entirely with natural fruits. In the case of White Peach and Cherry, the former of those two fruits is the most prominent, with the cherry notes a little lighter but providing a richer response to the peach’s tart freshness. Passionfruit, Pineapple and Mango goes from two fruits into three, with each combining in a way that makes them a little difficult to distinguish from one another to create a drink that's best thought of as "light, fresh tropical fruit drink".

Note: there may be other hard seltzers released by Moon Dog, but we won't be writing about them. We're happy to let readers know which breweries are playing in this space, but we're a beer website and need to focus our attention on the diverse array of beers being released.