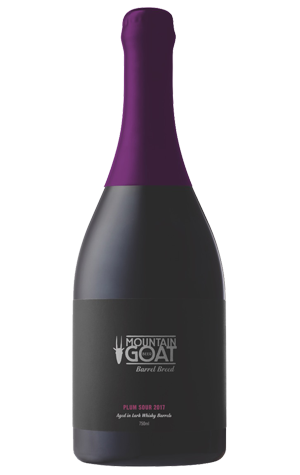 For the most part, when a new limited release beer leaves Mountain Goat it tends to be something with hops at its heart or a big and boozy beast that's spent time in barrels. But, for the brewery's first barrel release of 2017, there's barely a hop cone to be seen while the alcohol content remains below 3 percent.

It is a beer that's been a long time in the making, however. The base beer – a kettle sour – was brewed back in January 2016 and put into Lark Distillery barrels that had helped create some of their previous Barrel Breeds. Also added were 45kg of plums that, according to the brewery, arrived at the Richmond brewery by accident, and not wishing to look a gift horse in the mouth...

The beer and fruit spent 12 months in the barrels before being bottled (into just 250 wax sealed 750ml bottles). The various elements have combined to create a beer that's picked up a little colour from the fruit and offers decidedly funky, barnyard like aromas ("toe jam" according to one person we shared our sample with) in which pediococcus bacteria make themselves known alongside a creamy, oaky fruitiness. There's a creaminess to the texture too – perhaps surprisingly so for a beer of so little booze – as well as tart acidity, making for a more complex sour than many hitting the market from local brewers.