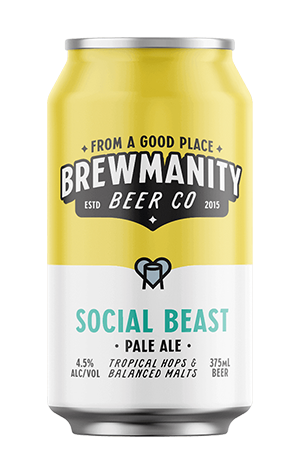 When the time came to put the first Brewmanity beer into cans, ensuring broad appeal would have been front and centre, what with the brewing company's focus on fundraising. Yet, thanks in particular to a sizeable amount of Vic Secret hops added late on in the brewing process, the Social Beast comes with a tropical hit upfront that will endear it to those with craftier tastes on the hunt for a session beer.

The Australian pale ale comes with colourful artwork by Clinton Weaver, while its name comes from Brewmanity founder David Neitz's former Demons coach Neale Daniher. He calls Motor Neurone Disease "The Beast" and the plan is to help fund the fight against the disease through the sale of every can and pot of this beer.