The diversity in the backgrounds of those getting involved in the craft beer industry in Australia is a sure sign of its growing popularity and reach. Collaborations have seen everyone from chefs to rock stars to radio stations try their hand at making beer. But there are others taking their involvement much further.

Among them is the driving force behind Brewmanity, a man best known previously for his exploits on the footy field. David "Neita" Neitz is the longest-serving captain in Melbourne FC's history but these days – having realised he wanted more from life after a career chasing a pigskin ball around an oval than the comparatively mundane corporate pathway that was staring at him – is working full time developing his beer dream.

There will be those who respond with cynicism to such a turn of affairs: someone with a level of fame from one area of public life moving into another where there's little obvious connection between the two. Yet it doesn't take much scratching of the surface to realise that Neita is committed.

Our first meeting was at Colonial Brewing's Port Melbourne home on the day that marked the beginning of the next phase for Brewmanity – the first batch of Social Beast was being canned. And it was a while before we could sit down for a chat as he was busy working the packaging line, stacking pallet after pallet of beer until the line was empty.

The connecting force between those two worlds, he says, is to be drawn to things he has a passion for and, with Brewmanity, that goes beyond making and selling beer. The premise is that good deeds and good times will flow from producing good beer with a percentage of all beer sales and 100 percent of profits from Brewmanity events going towards the fight against Motor Neurone Disease (MND).

At time of writing in May 2017, Brewmanity beers had hit taps in more than 100 venues around Melbourne and, taken together with funds raised at several beer inspired events, Neita and the Brewmanity team had already helped to raise more than $100,000 for MND in support of his mate and former coach Neale Daniher.

The wider Brewmanity team includes Melbourne teammate Paul Hopgood, who has been involved since the earliest discussions, while Mick Jontef, one of the most senior figures in the brewing team at CUB for decades, has left the big boys to oversee all areas of beer development from the outset. More recently, another former CUB man, Jamie Fox has brought his marketing nous to the table.

A Brewmanity brewery is the next part of the dream but, while that chapter is still to be written, the focus is on good beer, good deeds and good times – even if some of those good times involve a weekend spent sticking barcodes on 2,000 six-pack lids, one of the less glamorous joys of starting a brewing company Neita has discovered.

But what of the beer? The lead product, as of 2017, is Social Beast, a sessionable pale ale dry hopped with Vic Secret to give it a tropical kick. The "Beast" is the name former Melbourne coach Neale Daniher has given to MND; the "Social" is self-explanatory and in keeping with the charitable events with which Brewmanity launched.

For Good Beer Week and GABS 2017 they spread their wings rather further, creating two versions of an Eisbock. Dr Freezemeister is a 9 percent ABV straight take on the style with caramel and banana flavours, while their GABS specialty beer, Whiskey on Eisbock, used the Dr Freezemeister as its base and was then aged in a Starward whisky barrel.

Looking ahead, given there's a David Neitz Terrace bar at the MCG, you'd think he might be able to help get craft beer into Melbourne's sporting citadel – not that he fancies his chances of breaking CUB's grip on the taps just yet. But, as with Balter and their famous surfing founders and brewing partner Colonial, who struck up a partnership with Essendon and have Tom Bellchamber as an ambassador, Brewmanity should help entice more drinkers to try something new.

"The idea was always to give something back," says Neita, "through something that we love."

Making beer to help fight MND seems as good a way as any. If you ever spent a Friday night at home, back when you could count the number of Australian television stations on one hand, chances are at some point you caught at least some of Tango & Cash. The buddy cop movie saw Sylvester Stallone and Kurt Russell team up to defeat drug lords in a story that’s pretty much indistinguishable from countless other 1980s blockbusters. So what does that have to do with Brewmanity’s new beer, other than lending it the name Tango & Splash? Well, the best… Read more
Golden Yellow When the time came to put the first Brewmanity beer into cans, ensuring broad appeal would have been front and centre, what with the brewing company's focus on fundraising. Yet, thanks in particular to a sizeable amount of Vic Secret hops added late on in the brewing process, the Social Beast comes with a tropical hit upfront that will endear it to those with craftier tastes on the hunt for a session beer. The Australian pale ale comes with colourful artwork by Clinton Weaver, whose work adorns many… Read more
Pale Yellow 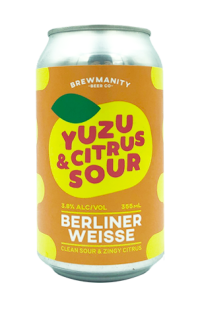 Brewmanity's Good Beer Week and GABS special releases for 2017 couldn't be much further removed from its Social Beast. For a start, Dr Freezemeister is twice the strength of their Australian pale ale. And, while Social Beast puts hops front and centre, this limited release draught beer is all about malt, booze and, well, ice. It's a take on the German Eisbock style created in collaboration with Colonial and inspired by Big Freeze events for which the base beer was partially frozen to increase its… Read more
Rich Brown