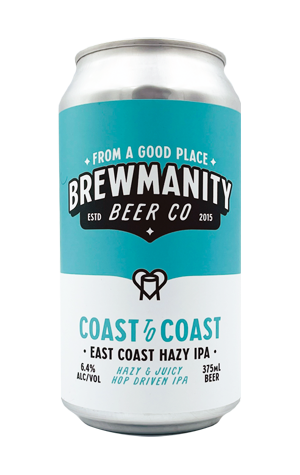 After finding favour with The Big Dance West Coast IPA and introducing the beer to their core offering, Brewmanity returned to the well of IPAs for Coast To Coast. As the name suggests, it's a beer for which they've swapped West for East, lean and bitter for hazy and softly sweet.

One of the first beers designed for the brewing company by Tim Miller, the head brewer who joined them from Little Creatures at the start of 2022, its solid yellow haze is crowned by a persistent white head that's reminiscent of peering out of the window once an airplane has broken through the clouds into the blue skies above (we can use such images again without fear of sparking tears).

Once you've got past wistful gazing and into the liquid, you'll find passionfruit / tropical flavours presented so smoothly that even the bitterness feels like it’s been put in place with a velvet glove. Indeed, if this is the sort of thing Tim is bringing to the party ahead of their brewpub opening in 2023, then bring it on.