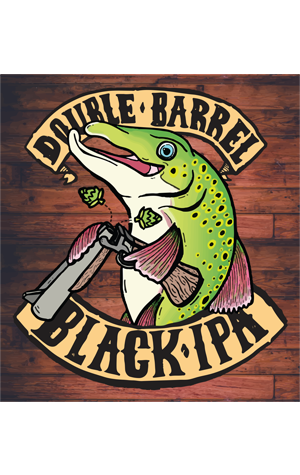 Pikes’ first three GABS beers have consisted of a 2.3 percent ABV tonic ale, an 8 percent root beer and now a 7 percent heavily hopped black IPA that was aged in two different barrels. It's fair to say these beers have shown an interesting progression over the years. Bradley Nolen and Alister Pike are lucky in the sense they have quite a few used wine barrels to experiment with as the brewery lives side-by-side with the family-owned on site winery. As such, the Double Barrel started as a black IPA that was aged extensively in Port and Shiraz barrels before being heavily dry hopped with Ella.

It's a beer you can expect to go through a variety of transformations: look out for fruity citrus tones from the Ella hops early on before, after a little ageing, the beer shows off more of the barrel characteristics as the hops diminish. The Double Barrel pours dark with a reddish hue once held to the light. Shiraz dominates upfront and lingers through to the back palate. The Port is evident, but less so, adding a touch of sweetness and contributing to what's a complex beer that finishes with just a nod from the roasted malts in the mix.