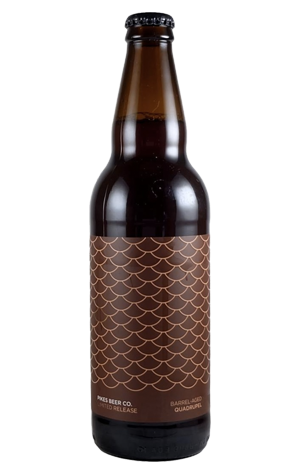 The Pikes team have been at it again, using their sibling winery's barrels to age something big, bold and Belgian. Initially brewed for GABS 2019 but now on wider release, the 10.7 percent ABV Belgian quad was built around a collection of Belgian specialty malts before being aged in seven wine barrels that previously housed three different red wine varieties: shiraz, mourvedre and cabernet. The beer was left to sleep for five months, long enough for the barrels to leave their mark in terms of colour, aroma and flavour.

Elements of dark red flicker amid the deep, dark copper colour, with yeast-derived esters dominating the aroma initially, with a splash of red wine, currants and sultanas coming through too. The boozy warmth wraps you in a blanket upon the first sip, warming you to the core. Boozy, dark black forest cake comes to mind flavour wise – sticky and sweet with those dried fruits hitting strongly on the palate, mixed in with a few black berries. The red wine barrels are evident but not overpowering or unbalanced, however, with the beer picking up just enough barrel character to round off the sharpness on the finish.