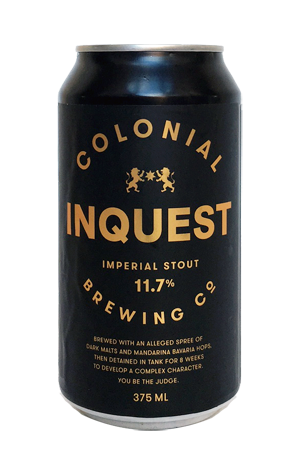 Judged by their core range, you could assume Colonial Brewing Co, the operation that started out in Margaret River more than a decade ago and now brews out of Port Melbourne too, is a brewery interested only in delivering tight, approachable beers and cider. Yet take a look through the catalogue of one-offs – usually tagged Project beers – and, as well as finding rather a lot named Gary, you'll see they're not afraid to throw off the shackles: truffle beers, a long lineup of globe-trotting IPAs and so on. Still, like the Spanish Inquisition, no one would have expected this.

Colonial Inquest is the biggest beer ever released by the brewery and, surely, the biggest ever beer put in a can in Australia. As more and more people switch to cans, there's an argument that certain beers belong in bottles, beers like imperial stouts (although making an acquaintance with Oskar Blues' barrel aged Ten Fidy will soon disabuse you of that notion). But here Colonial has popped 11.7 percent of dark, tarry beer into black, gilded tinnies.

There's a figgy, dark fruitiness upfront, possibly even some of the orangey Mandarina Bavaria hops they added too at this relatively early stage in its life (it spent eight weeks in tank before being packaged), but as it warms it's more about the malt characters: heaps of chocolate, a touch of roast, a hint of smokiness (Manuka smoked malt made an appearance). It's boozy, for sure, although not so much in the hot sense as in beer-as-after-dinner-liqueur.