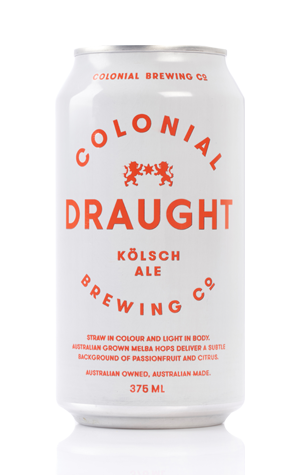 Colonial's flagship started out with the name Kolsch as it took its inspiration from the German beers from the Cologne region. Long before many other craft breweries looked to add an approachable beery beer to their lineup, this was that sort of beer, the kind anyone from a mainstream lager drinker to a beer geek wanting something refreshing to quaff could agree upon. It went on to become the first Colonial beer to be canned too, transitioning from Kolsch to Draught as it did so.

The beer inside remains the same: as tight and clean as a beer with nowhere to hide your faults should be, with a lightly fruity hop character, delicate malt flavours and plenty of "sessionability".