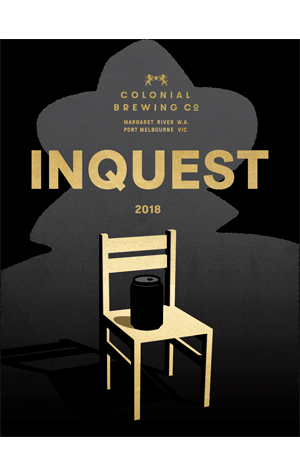 When is an imperial porter not an imperial porter? When it’s a Frankenporter, at least according to Colonial's cross-continental brewing team, which took the opportunity during Good Beer Week to get together – a catch-up that proved a little Mary Shelley-esque. Building on Inquest 2017’s success, Colonial’s 14 brewers workshopped the concept for a beer that was rich, dark, strong and above 10 percent ABV. The result? A blend of three versions of imperial porter that were then blended with a 15 percent ABV imperial IPA – in other words, a Frankenporter.

In comparison to last year’s liquid chocolate-fig debut, the first thing that hits this time around is the booze - a disarming spiritous opening salvo presides over an audience of dark malts, soy, molasses, cocoa and dark chocolate, somehow remaining balanced save for its lasting prickly kick. Low carbonation aides a silky mouthfeel, while the fortifying imperial IPA artifice whispers hints of Terry’s Chocolate Orange.

Inquest 2018 is a bold and intriguing twist on “rich, dark, strong and above 10 percent ABV” and one that asks questions about the direction of 2019’s iteration. Whatever the evolution, for now, as the gilded font noir can suggests: “You be the judge”.

And other good retailers nationwide