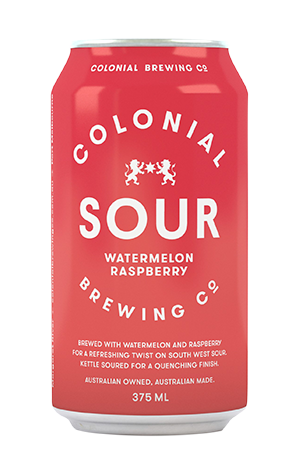 The peach-hued South West Sour has become a major beer for Colonial Brewing, having first been brewed as a seasonal at their smaller Margaret River brewery and since joining the ranks of the brewery’s core range. Ahead of summer 2021, that beer’s been given a buddy in South West Sour Watermelon Raspberry, which takes that original beer’s tart base and brings in watermelon juice and pureed raspberry.

It pours a similar light gold to its sibling but there’s a touch of pink in its colour that lets you know what might be in store for you. Those two fruits burst out from the glass suddenly too, like they’ve been freshly squeezed into the tin and are lying waiting for that can to crack open. Though the watermelon and raspberry do add a touch of sweetness, the beer’s far from being straight fruit juice, with a lactobacillus-laced hit quickly providing a tart lift. Summer 2021 may not have started at the time of writing but we can see a lot of pink cans being shared at barbecues and picnics in the near future.