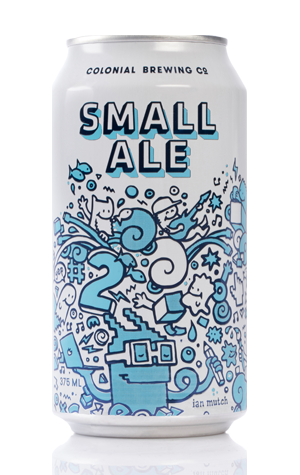 In 2014, Colonial Brewing decided to pop beer inside a can in the shape of their Kolsch rebranded as the somewhat logic-bending Draught Ale. A fine drop it is too, one that deserves to find a home in Eskies across the country whenever the warm weather hits. They followed it up with a second canned beer. But this one comes with a twist. Or is that a spin? Or a 360 degree turn?

You see, not content with merely popping their Small Ale (a 3.5 percent ABV citrus hopped mid-strength that takes its name from the beers that everyone – man, woman and child – would have knocked back when the water wasn't safe in the old days in the UK) inside aluminium, they've gone for some rather funky cans too. Their tinnies are of the kind first used by Sly Fox in the US in 2013 and come with a 360 degree lid. In other words, rather than just pulling back a ring and slugging through the resultant hole, you can peel off the lot and use the can like a proper drinking vessel. Thus, even if you don't have a glass handy, you can release the full aromatics of the beer. Handy.

The beer proved so popular, it graduated to the brewery's core range and is now available widely across the country.