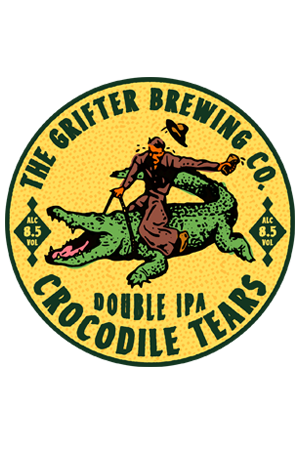 They rarely allow themselves to be swayed by hype or popular opinion do the brewers at Grifter. That means a visit to their brewery isn't likely to end with you sipping on the latest trending beer style or something that’s sat brooding in a barrel. And it probably explains why, despite having now been around for five years in a market becoming increasingly attuned to bold beers – and despite having won plenty of praise for some of their American IPAs (Big Sur and Marnie’s Majority being front of mind) – they’ve never relented to the demands of hopheads and knocked out a double IPA. Indeed, the seven percent ABV threshold is about as high as they’ve ever dared to go in any style. Here, then, is what you might call their first foray into big beer.

It’s called Crocodile Tears and it’s a pale double IPA. As in, really, really pale – about as pale as they could make it without it turning transparent. That was by design as they wanted to muck around with the concept of creating something that drank like a big beer but which looked just like the lighter ones most of the populations drinks, which is to say lagers. The visual game ends, however, as soon as you stick your nose near it: a heavy hand in the dry hopping means its fruity aromas fair lurch out at you. At 8.5 percent ABV, it’s not an unruly beast by modern standards and it sits on that very lean malt base, but there’s a lot of dryness and a fair whack of boozy heat that combine to let you know full well when you're swallowing this croc.