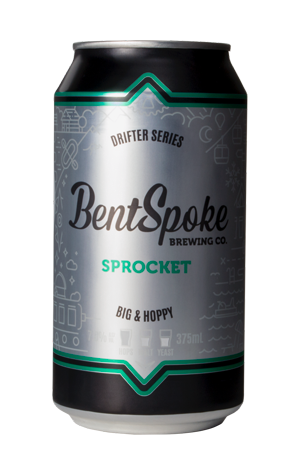 With such a fine lineup of beers covering a broad array of styles – IPAs of every size, farmhouse style ales, lagers, red ales, brown ales, experimental releases and so on – it can be tough to settle on a favourite from the BentSpoke stable. Yet our first encounter with Sprocket, in its original format, led to its appearance as the brewery's representative in The Great Australian Beer Guide at the expense of more popular fellow IPA, Crankshaft. It's easy to go either way, however; one waft of the aroma once you peel off the latter's 360 degree lid and you're in love.

Now it's easier to do a side-by-side without visiting Braddon as Sprocket is one of two BentSpoke beers to appear in the canned "Drifter Series", meaning it may be an occasional release or, if demand is there, join the core range. Touch wood it's the latter, with Sprocket delivering on its "big and hoppy" promise. It's nudged up a little in booze from its earlier appearances – now 7 percent ABV – and these days features malt from small NSW operation Voyager Craft Malt. The big, tropical hop hit remains, albeit with a firmer backbone and bitterness, as does the all round deliciousness.