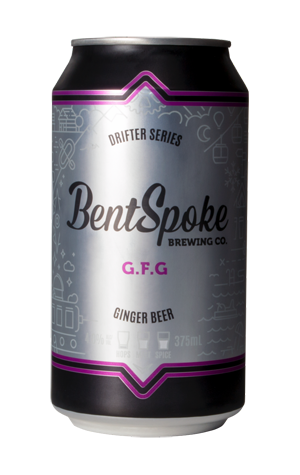 Joining Sprocket as the first of two beers in BentSpoke's "Drifter Series" of canned releases is GFG, AKA Gluten Friendly Ginger. It's uses an enzyme brewers can add to break down gluten from any barley or wheat in the beer to make it suitable for some people with gluten intolerance. And, of course, it uses ginger – and plenty of it too.

The beer won a vote run through the brewery's website last year asking which one drinkers would most like to see in a can and it certainly offers something different to almost anything else in packaged form across Australia. Pouring a hazy deep gold, the ginger leads the way – both aroma and flavour wise, while delivering a prickly backend kick too – atop a sweet base to which the brewer suggests adding a slice of lime.